The year 2020 has felt different from 2019 in so many ways, but some important things have remained consistent. This year, just as in the last 5 years, Team FD/MAS will be awarding a research grant to an FD/MAS researcher through the UPenn Orphan Disease Center’s (ODC) Million Dollar Bike Ride. With thanks to Association MASFD and Team Captain Cindi Brandt Levin, Team FD/MAS was able to raise in excess of $60,000 to support FD/MAS research. As part of this campaign, Team FD/MAS raised an additional $5,000 directly for the FDF to support our organization’s research initiatives.

Team FD/MAS is especially grateful to Aurélie Lagneau and Association MASFD out of France, which gave $20,000 to launch our campaign efforts. “Association MASFD’s support cannot be overstated,” said Cindi Brandt Levin, Captain of Team FD/MAS, “The ODC matches up to $30,000 that any disease team raises for the Million Dollar Bike Ride (MDBR), so long as it raises at least $20,000. gift ensured that we met the threshold for a match. It’s an incredible opportunity to double our grant-giving power and we could not have done that without this support.” 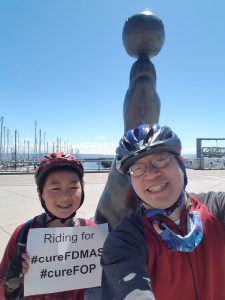 Dr. Ed Hsiao of UCSF, a renowned FD/MAS researcher and active member of the FDF Medical Advisory Council rode for Team FD/MAS with his son!

“We launched our campaign late this year, and we didn’t make the decision to move forward lightly,” explained Adrienne McBride, Executive Director of FDF, “It has been a tumultuous year and we knew it would be hard to ask our community to rally together. We ultimately decided that continued research is important and if we don’t step forward to make those advances happen, no one else will.” Despite the financial, social, and medical challenges that the entire world has faced this year with the COVID-19 pandemic, continued support and research on behalf of the rare disease community is vital. Those suffering with FD/MAS cannot take a break from their diagnosis, which is why FDF is committed to continuing to support research grants, collaborations, and initiatives.

The response from the community was heartfelt and reassuring. “We were especially moved by the efforts of Dr. Andrew Shenker, our Scientific Advisory Council Chair, who personally stepped forward to campaign for Team FD/MAS and raised over $5,000 going directly to the MDBR research grant,” said McBride, “His willingness to give time and energy to this community is inspiring.” Additionally, seventeen individuals and families signed up to register with our team through UPenn’s virtual event, and 58 patients, caregivers, friends, and supporters donated to help fund future FD/MAS research initiatives. Their generosity and determination will set the success of future advances in FD/MAS care.

Notably new this year is the addition of MAS to the team name. This change is in recognition of the ways in which FD and MAS are tied to one another clinically and scientifically. Researchers have really shifted towards addressing these diseases together on a spectrum since they both come from the same genetic mutation.

From here, FDF’s volunteer Scientific Advisory Council will work to finalize a Request For Proposals, asking researchers for their most promising ideas for understanding and eventually treating FD/MAS. Scientists will submit their proposals in early fall and a winner will be announced this winter.

A Still from the Team FD/MAS Virtual Social Celebration