When Ann Molitor was first diagnosed with fibrous dysplasia and McCune-Albright syndrome, she was scared and surprised. What kind of future would she have? Many FD/MAS patients share these fears and concerns, but very few have Ann’s perspective… because Ann received this news in 1946! We caught up with Ann a few weeks after her 100th birthday to learn about her experience as a centurion with FD/MAS.

Ann was born in Helena, Montana on October 10, 1916. During WWI, her family moved to Seattle, Washington where her father found work in the shipyard. As a child, Ann loved reading and swimming. Her legs hurt her quite a bit, but she learned to accept the pain and push forward. “My mother and father thought it was growing pains; that was the diagnosis back then.” Doctors gave her all kinds of ointments to treat the pain, even horse liniment. “They said I’d outgrow the pain, but I never did. I still haven’t!” 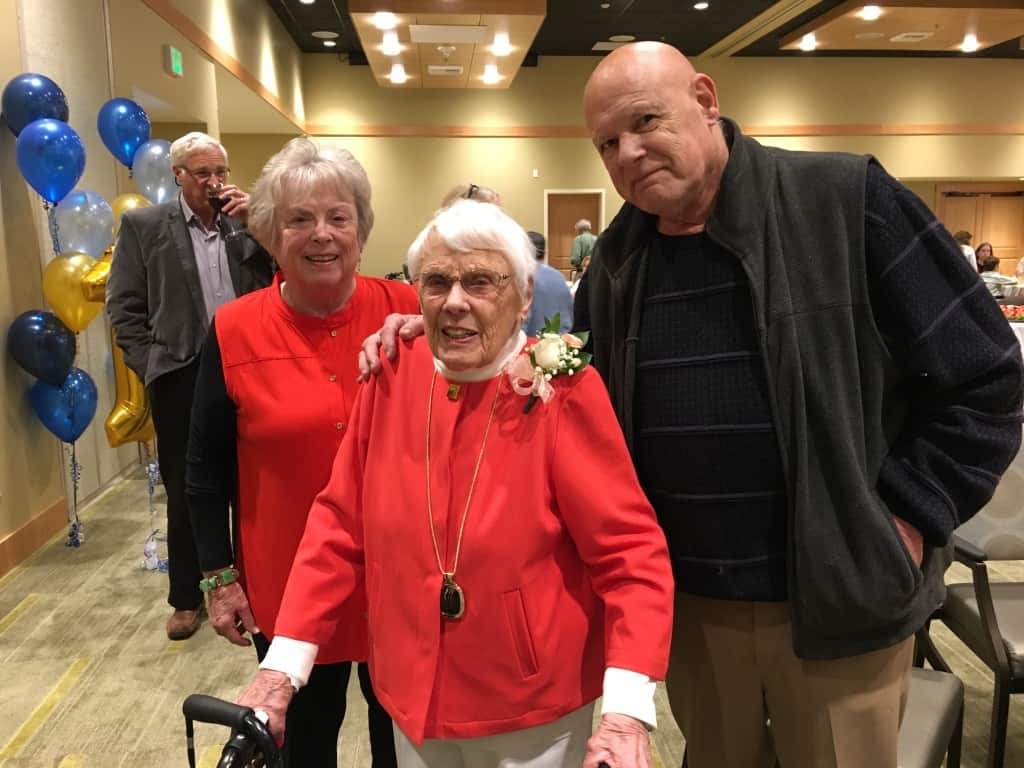 Ann and guests at her 100th Birthday Party!

Despite the ache in her legs, Ann took a job at Boeing where she became an Executive Secretary. “I had a great boss; he was the Senior Vice President of Boeing and our office was the heart of the company. We were always busy with the stock market and board meetings. I loved it!”

In 1946 Ann went in for her very first x-rays. She was prepping for a surgery unrelated to her bone pain. The images came back showing what we now recognize as characteristic FD lesions, but at the time the disease was just being discovered. “No one knew what to do with me,” Ann recalls, “I began to read everything I could get my hands on. I became the expert. The doctor at the University of Washington used to turn his lectures over to me, because I knew more about my disease than he did!”

Ann has both fibrous dysplasia and McCune-Albright syndrome, with 19 lesions in her body and 9 in her skull. “That explained the pain that I had always felt. I was lucky not to have to have the debilitating pain that some patients describe. I hurt, but I was never on bedrest for it.” says Ann, “But the McCune-Albright syndrome was a real headache.”

Although Ann was scared about her diagnosis initially, she’s packed a lot of adventure into her 100 years.

She met and married an equally adventurous man. “We met on a cruise that went through the Panama Canal and up the west coast of the United States. He was traveling with his family,” Ann recalls. Together the two of them have enjoyed 18 other cruises and many land tours all over Europe and Asia. Even at 100, Ann still enjoys daily outings to shop, visit family, and attend doctor’s appointments. Among her favorite visitors are her two granddaughters and three great grandchildren.

She still recalls speaking with other FD/MAS patients at initial patient meetings in Chicago and Bethesda. “Families are always nervous about their young children with FD/MAS. I can be an example to them. Many of those young patients I met have gone on to college and become doctors themselves.”

Ann insists that she is nothing special and that she is, in fact, lucky. “My advice is not to fight yourself; be happy and accepting.”