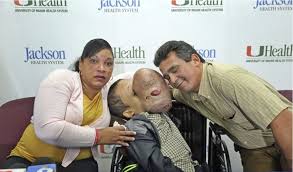 According to Emanuel Zaya’s mother, she noticed a bone condition in his left arm and leg when he was four years old. He managed his condition well until age eleven, three years ago, when a “pimple” appeared on his nose. Instead of clearing up after a few days, it continued to grow. The family visited every doctor they could find, but none were able to help relieve Emanuel’s pain and distress. Though the growth was benign, experts feared that the weight pressing on Emanuel’s neck and trachea could be life threatening. He was unable to breathe through his nose, and had difficulty eating and seeing because of the growth.

Whether or not this was FD, the FD Community Cared

The FD/MAS community immediately began following the story, rooting for one of their own. But from the beginning, some community members including researchers noted that while some of Emanuel’s symptoms sounded like FD, the facial tumor that threatened his life seemed atypical for a craniofacial FD tumor. Nevertheless, his struggles with surgery and facial deformity were familiar to so many in the FD/MAS community, that our hearts went out to him and his family.

The Zayas were able to secure a medical visa which allowed them to travel to the US for surgery at Holtz Children’s Hospital in Miami. The Jackson Health Foundation raised money to help the family cover the $200,000 procedure. On January 12th, 2018 Dr. Robert Marx, chief of oral and maxillofacial surgery at University of Miami, led a team of surgeons who volunteered their time in a 12 hour surgery to remove the growth. “This was probably the most technically difficult surgery I have ever done,” Marx reported to MSNBC’s Today, “The tumor was exceedingly vascular and we were controlling bleeding every minute.”

Dr. Marx reported that Emanuel was in the ICU recovering and commended his team for their hard work. Cell samples were sent for testing to Drs. Kirsten Pan and Michael Collins of the NIH and Drs. Michael Whyte of Shriners Children’s Hospital of Tampa and Steve Mumm of Washington University of St Louis. Initial genetic testing was negative for the GNAS mutation that causes FD/MAS. Further testing is ongoing.

The rare bone community continued to root for Emanuel as he fought to recover. Dr. Marx planned to continue pursuing genetic testing and histopathology to determine the diagnosis of Emanuel’s baseline bone issue, and to treat Emanuel with the best medicine available considering the many questions surrounding his condition.

Days later, Emanuel’s Condition took a turn for the worse

Sadly, the physiological stress of the procedure proved to be too great for the young man. Days after the operation, Emanuel began to experience kidney and lung failure, which eventually lead to his passing. It is always sad to lose a life, but it is especially tragic to lose someone so young, brave, and full of promise.

The Zaya family was grateful to Dr. Marx and all who had helped their son at a chance of recovery. A spokesperson for the family shared words of hope and healing on Facebook, “we really believe that Emanuel effectively received a complete healing and that now he has a perfect sweet face, and two legs that work, and that he is running and jumping and having fun in heaven right now.” The Zayas have decided to donate Emanuel’s body to research with the goal of learning more about rare bone conditions.

The FD/MAS community mourns for Emanuel and his family. “We are heartbroken to hear of Emanuel’s passing,” said Deanna Portero, FDF’s Executive Director, “Even if this was not FD, we feel great empathy for this family, and the entire FD/MAS community sends our deepest condolences.” The FDF will be sending a letter of condolence to the Zayas and we welcome any messages of comfort and signatures that the FD/MAS community would like to include. To express your condolences, click here.