New York City reported its first case of COVID-19 in March of 2020. By April it was the hardest hit area of the United States, the city’s medical infrastructure was completely overburdened, non-essential businesses had been shuttered, and thousands of New Yorkers were out of work.

As a life-long New Yorker, Lauren Ruotolo, who stands 4’0 and walks with crutches, experienced the pandemic’s grip on the city first hand. What makes Lauren’s story unique is that she is also living with a rare and debilitating disease called McCune-Albright Syndrome (FD/MAS). She was diagnosed as a toddler with a severe case of MAS that included complicated hormone imbalances and made her bones weak, malformed, and easily broken. Despite these challenges, Lauren lives a busy life as an innovative marketing consultant. She also serves as the President of the Fibrous Dysplasia Foundation.

This pandemic has put an incredible strain on all of us. We asked Lauren to share her experience living in New York City during this time, and as a person diagnosed both with COVID-19 and a rare disease like FD/MAS. 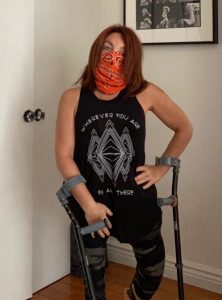 What has it been like living in the city at this time?

Lauren Ruotolo: It was really interesting. Right before it all happened, you didn’t understand the impact COVID would have on us. We just couldn’t comprehend it. I mean, I’ve lived in this city through 911, through those terrible blackouts we had, and through Hurricane Sandy. I remember thinking that the press was being ridiculous, and they aren’t going to shut down the city.

But then the city really did stop. Things seemed fine, but then you went to your local coffee shop and realized, oh wait, I really can’t sit down here with my coffee. It was eerie. I live in the heart of the city, and I hear street noise all the time, at all hours, but soon all I was hearing was ambulances. So many ambulances.

That must have been especially scary when you became sick. When did you first start feeling symptoms?

Lauren Ruotolo: I was one of the early cases. The city shut down March 13th, and by March 17th, I felt really tired like I just had a head cold. But a few days later, I couldn’t pick my head off the pillow. My skin felt hot, but I had the chills, and of course, I couldn’t get a thermometer. In New York, we’re used to getting anything at all hours, and all of a sudden, there were shortages of things, no thermometers to be found anywhere.

By March 22nd, I was really in a bad place. I was so tired, but I didn’t have a sore throat or anything. I thought it was just my anxiety because I have had anxiety in the past, and it felt like I was having a constant panic attack. But I felt like I couldn’t breathe, so I knew there was something really wrong and I went to urgent care.

There were some concerns raised over the rationing of care, especially in a hard-hit area such as NYC. People worried that because of a rare diagnosis or additional health concerns, they might be passed over for medical interventions. Did you ever feel you were being treated as a second class patient?

Lauren Ruotolo: Well, at the time, I went to urgent care they were so limited in the number of tests they had, they were barely giving out tests at all. I didn’t have a fever, and I didn’t have a sore throat, so they weren’t giving me a test. They told me I could go to the emergency room, but a trip to the emergency room for me as a person with a rare disease is very different than it is for other people. I wasn’t going to go through that.

I eventually just had to advocate for myself, and I think that we all have to do that. Two more days went by, and at that, I couldn’t walk to the kitchen. I lost my sense of taste and smell. I insisted on an appointment with my doctor, and there, I tested negative for the flu and strep. Finally, my doctor said he was going to get 50 tests in a few days, and he’d save one for me. I was there first thing to make sure I got one of those tests, and of course, it came back positive. My oxygen level had dropped to 91%, just barely above the level where they put people on oxygen.

Were they able to do anything for you?

Lauren Ruotolo: There wasn’t really anything for them to do. They gave me a Z-pack and told me to start it if I started to feel worse but not quite at the hospital level. I didn’t go to the hospital, but I was pretty sick for at least a week. I couldn’t eat. I was white as a ghost and would wake up shaking. I had to force myself to drink something just to boost my blood sugar, but I didn’t feel like having anything.

I did eventually take the Zpack and started to feel better. I really wasn’t myself for five weeks.

Do you have any idea how you got COVID?

Lauren Ruotolo: You know, I was so careful. I was washing my hands, my face, but I wasn’t washing my crutches. I went to my Pilates studio the Saturday before I got sick, and I wiped everything down, but not my crutches. Now that I think of it, it’s very important that people with adaptive equipment have to think differently about all of this. We need to think of our crutches as our hands, and they need to be sanitized.

Do you have advice for others in the FD/MAS community as we continue to create a new normal with the threat of the coronavirus?

Lauren Ruotolo: You know, being careful and adapting to the situation is always normal for the FD/MAS community. If you’re rare, you’re always on alert. Like for me, when it rains I have to think differently, okay it’s going to be slippery, I’m going to take longer to get where I’m going, you know. I have to adapt. I’ve never had a choice not to.

So I’d say adapt, stick up for yourself, be an advocate, know when your body is telling you something is wrong, and most importantly, be careful and stay healthy — BE UNSTOPPABLE and NEVER GIVE UP!