Real Deliverables in Our Lifetime

“Traditionally, drug development has been left to pharmaceutical companies,” Charlie explains, “and if they didn’t see a profit margin in it, they didn’t explore it; even if it was good science. By contrast, it’s much scarier for those of us in academia to pursue drug development.” Charlie, or more formally, Charles Hoffman PhD, the Director of the Biology Graduate Program at Boston College, is interested in good science and one of those rare academics who has taken the leap into pursuing science for a real, deliverable cause, the potential discovery of a treatment for FD/MAS.

Dr. Hoffman is one of the four Team FD Million Dollar Bike Ride awardees from 2018. He responds to emails with the more familiar “Charlie” and he clearly has fun with his work. His university web listing also includes links to the photos he likes to take at the academic conferences he attends. He calls himself the “Paparazzi of Pombe,” a reference to Schizosaccharomyces pombe, or fission yeast, his area of expertise. Get it? it’s a science joke! We asked Dr. Hoffman how he came to study FD/MAS, and like most things in life, the opportunity was an unexpected surprise.

Dr. Hoffman fell into the Team FD family by chance. He was invited to speak at the Third International Workshop on cAMP signaling in France. He spoke about his work on compounds that elevate levels of something called cyclic AMP (cAMP) in yeast cells. Cyclic AMP also happens to be the issue in FD/MAS in which mutated genes lead to the overproduction of cAMP.

Later on during the conference, Dr. Mike Collins of the National Institutes of Health (NIH), a long-time Medical Advisor for FDF, spoke about his work with FD/MAS and the need to find inhibitors of the GNAS protein that causes cAMP overproduction. “I didn’t know any of this literature, the stuff that Dr. Collins was referring to,” says Dr. Hoffman, “but I realized his big question would just mean reversing the type of screening my lab was already doing. I went up to Dr. Collins during one of the conference breaks and told him,

“I think we can find the kind of compounds you’re talking about.” 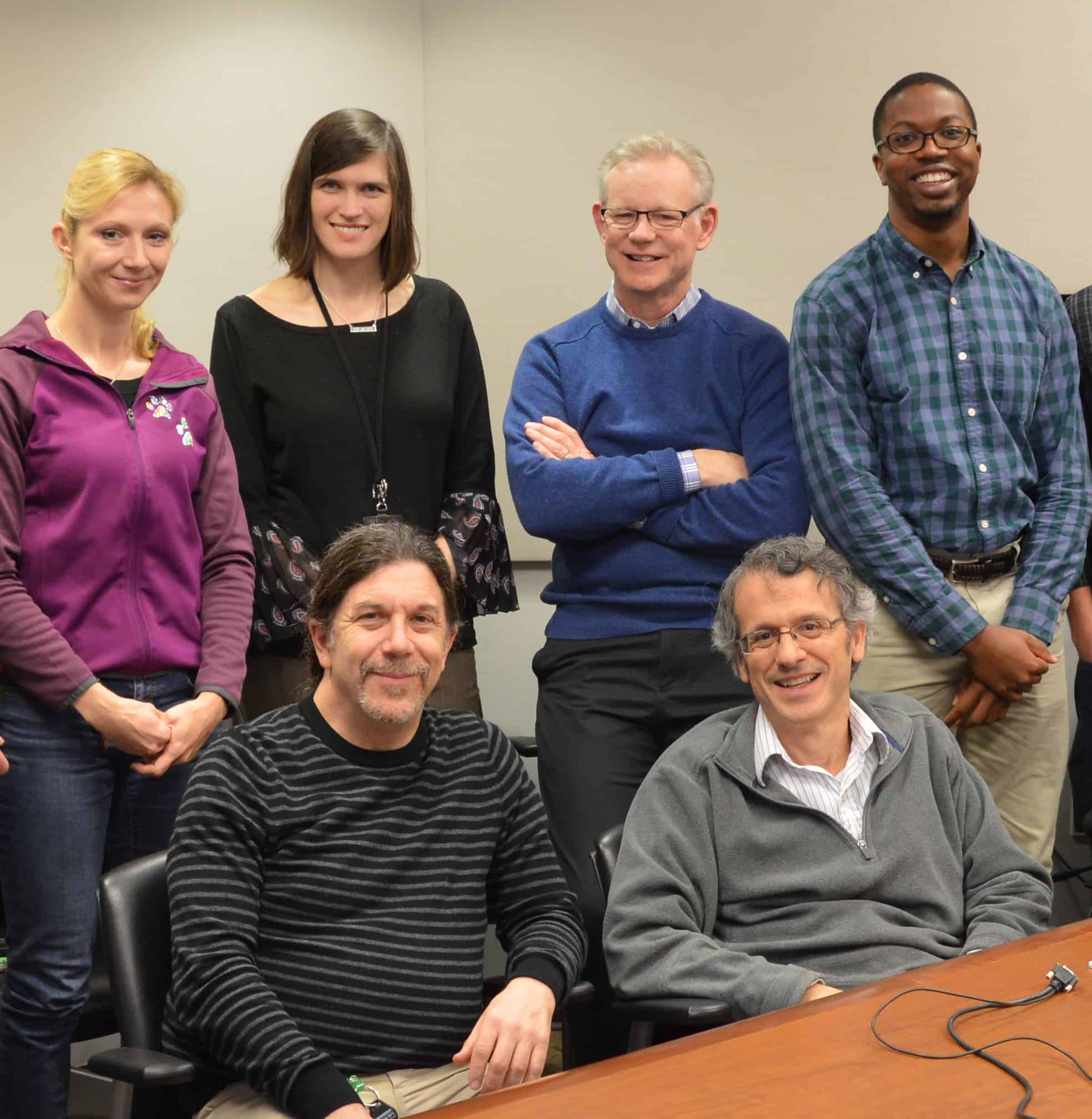 From there, the pair started the kind of collaboration that the FDF and  FD/MAS community hopes will arise from these meetings. Dr. Collins sent Dr. Hoffman clones of both FD/MAS affected genes and healthy genes as well as clones of the nine adenylyl cyclase (AC) genes that encode the targets of GNAS activity. Dr. Hoffman also completed a ten-week sabbatical at the National Center for Advancing Translational Science (NCATS) to pilot his screens with Dr. James Inglese. Dr. Collins helped point Dr. Hoffman toward the two ACs that seemed scientifically promising and after looking through a library of 125,000 compounds, Dr. Hoffman came away with 47 compounds to further validate and characterize.

Could these 47 compounds lead to real treatment? “Oh totally,” the answer comes easily to Dr. Hoffman. “You see there are three ways that a compound can be discovered and lead to drug development. You can find a compound that inhibits the activity you want by purifying the target protein in a test tube. This let’s you know that your compound works on exactly what you want it to, but almost none of these compounds work on real cells because they don’t have the physical properties to get inside the cell in a real-life environment. You need a lot of extra chemistry to get into the cell.”

“The second way is to take the cells you’re interested in and look for a biological change that would reflect that process. This way, you know you can get into the cell, but it’s harder to know if the compound is working on the exact target protein you’re interested in or something completely different.” It’s possible that you affect a related protein that controls the same biological process but that this secondary protein is also involved with other functions and thus produces some bad side effects. This screening method cannot distinguish between compounds that act on the therapeutically-beneficial proteins from ones that act on the proteins that will also produce harmful side-effects.

Dr. Hoffman’s lab is uniquely positioned to accomplish the third approach, taking the target of interest and expressing it in yeast, a single-celled organism, which takes advantage of both the first two types of screening. “The compound has to be able to get into the yeast cell in order to change it. But we also have an advantage, because we can engineer the yeast cells to express either the target protein or a different, but related, protein that carries out the same function. We can quickly see what compounds are not working through the target protein and eliminate false leads,” he explains.

Once Dr. Hoffman narrows his list of 47 compounds, he’ll pass his work along to NCATS, where scientists will narrow down those potential leads based on chemical properties. Meanwhile, Dr. Collins at the NIH will see how the promising compounds perform on cell cultures of human and mouse model cells. The handoff will happen by the end of this year and this project grant, although it’s much more difficult to say how long it will take for that narrowed list of compounds to become a treatment accessible by patients. Nevertheless, it is precisely that time frame–something with an end in sight within our lifetime–that makes this work daunting.

“When I started I was doing extremely basic research. There’s some comfort to working on knowledge for knowledge’s sake. If I generate knowledge that others build from, I don’t need to see if that knowledge produces anything to know that I’ve achieved something. With this work, studying medically relevant stuff that could actually develop into a drug for patients, I will know for sure whether I’ve succeeded or not.” explains Dr. Hoffman. Now he has real deliverables for real people.

On Team FD, we’re grateful for Dr. Hoffman’s curiosity and expertise as well as the bravery that has led him to take on this research. So many FD Warriors call on bravery in the face of an intimidating diagnosis. We’re grateful to know we have scientists like Dr. Hoffman, Charlie, on our team who are willing to take on the big, relevant, scientific challenges.

The Million Dollar Bike Ride grant is the only grant supporting Dr. Hoffman’s lab on this particular project. Thank you to Team FD, the twelve campaigners, and the friends, family members, neighbors, and colleagues who donated to Team FD to make Dr. Hoffman’s work possible.