HomeBlogFoundation NewsPatient SpotlightThe Artist Who Lived Life with Every Stroke

The Artist Who Lived Life with Every Stroke 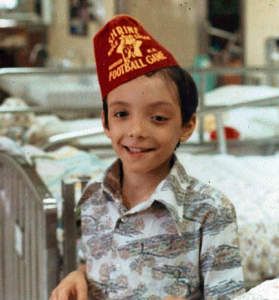 Mauricio as a young boy at Shriners Hospital

“I knew something was not right with my child. I could sense it from when he was very small,” explained Mauricio Saravia’s mother Marisa Damele. “Then, as he grew older, he would hit his head on the wall and with his hands, we didn’t know exactly why he would do this. I’m his mother. Mothers know their children like no one else could. I knew something was not right. But the doctors would not listen to me.”

In advance of the publication of her new memoir, Marisa spoke with the FDF to share the painful and magical story of her son’s fascinating life. A painter, writer, artist and one of the most famous people with McCune-Albright syndrome, Mauricio lived a whirlwind life–sometimes glamorous, sometimes harrowing–until he passed away from complications of McCune-Albright syndrome in 2008 at the age of 39.

Marisa’s frustration with doctors mirrored that of many other FD/MAS patients and caregivers. It was hard for her to convince medical providers who were unfamiliar with the disease of the medical intricacies, and her family had to become experts out of necessity. Marisa and Mauricio’s experience was exacerbated by where they lived, the South American country of Uruguay.  The practice of medicine in Uruguay when it came to FD/MAS was significantly behind that found in the United States. “Mauricio and I went on a journey, an odyssey really, to find the best care we could and make the most of this life,” said Marisa. “His determination and positivity were relentless. He truly believed he had a purpose in life and everyone who met him loved him and became a believer as well.”

When Mauricio was six years old, he traveled to the United States for surgery at Shriners Children’s Hospital in Springfield, MA. “By this time he had already lost the sight of his left eye.” recalls Marisa. “His father would bring him up for surgery, but afterwards he would need to leave and return to Uruguay while Mauricio remained in the hospital’s care for as long as 3 months at a time.” Alone and limited by his recovery, Mauricio taught himself English and began drawing to entertain himself. “Shriners was a magical place for these children, they really did their best to keep the kids happy. I think it was at Shriners that he really fell in love with the United States.”

As a child living with significant chronic pain and deformity, Mauricio dealt with terrible teasing and bullying, but he never let his limitations or looks define him. “I think many people who do not fit society’s idea of beauty tend to hide away and shrink into themselves, but Mauricio found a way to reflect and reach outward.” At nine years old, Mauricio overheard a panel of doctors say that he would would not live a long life. Years later, Mauricio said “The deadline that doctors put on my life, made me appreciate life more.” He never took time for granted and wanted to experience as much of the world as he could.

“Mauricio would go to a dance club and insist on dancing in the middle of the floor. People would say terrible things to him, but before long he’d have two or three women out there dancing with him. His enthusiasm for life was so infectious, it was impossible to be gloomy around him.” 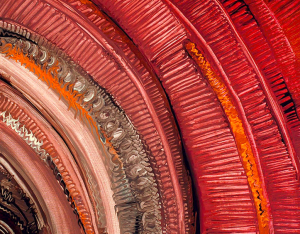 Although he did not have the necessary immigration authorization, in his twenties Mauricio decided to move to Denver in 1998 to seek out a better life for himself. Mauricio taught himself philosophy, computer technology and design. He started writing poetry and painting, and developed his own business, freelancing as a graphic designer. “Perhaps because he looked so different, people assumed that he had to be here legally,” said Marisa. During his time in Denver, Mauricio made many close friends, launched his own magazine, Artists Interviews, where he interviewed artists and celebrities, and continued to develop his skills as an artist. Despite flourishing as an artist and creative, life in Denver was not always easy.

“Mauricio became very ill while he was in Denver and I came to the country to help him. He wasn’t able to eat or digest food, he became very dehydrated and even fell unconscious.” Marisa brought her son to a hospital where they immediately put him on IV fluids. “I was so grateful that they revived him, but the doctors told me never to set foot in the hospital again.” Because Marisa and Mauricio were undocumented, they were told that the hospital would no longer serve them, regardless of how sick he might be.

Mauricio continued to work and to pursue art, but he also struggled with his health. When his health took another turn for the worst, and it seemed that he was once again at death’s door, the hospital turned him away without care. “Thankfully, there was a pastor who was willing to help us.” They fed Mauricio small sips of water and chicken broth to slowly bring him back to life. “The Mormon church was very kind to us, they helped us and cared for Mauricio in their clinic, even though we were not Mormons ourselves.” recalls Marisa.

Mauricio eventually found more specialized care at University of California, Los Angeles. The clinic there helped him control some of the endocrine system problems that led him to be so sick.

Now living in Los Angeles, Mauricio continued to find success in his work. He attended red carpet events alongside A-list celebrities for Artist Interviews, he created movies, and continued to paint. Perhaps one of the most interesting aspects of Mauricio’s life was his interest in the glamour and beauty of Hollywood, in contrast to his deep, reflective writings on the meaninglessness of physical beauty. Much of his writing offered philosophical and poetic ruminations on the rejection of our physical forms. Even in the midst of Los Angeles’ celebrity culture, his writing, his art, and his personal connections were imbued with the depth of Mauricio’s spirit and intellect.

“He was doing so much better, I thought that he would live forever,” said Marisa, but although Mauricio’s endocrine issues were under control, his scoliosis continued to cause problems. Eventually, Mauricio was overcome by complications of untreated and severe scoliosis. 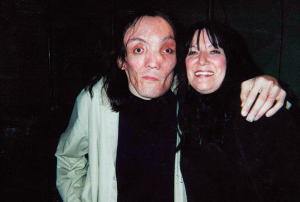 Mauricio with his mother Marisa

“The last few months of Mauricio’s life were very difficult. He began to have trouble eating and speaking,” said Marisa, “If there had been a willing surgeon, I know we could have saved his life, but they would ask us where the money was, where was the health insurance? And for that there was nothing we could do.” As an undocumented person, he had substantial obstacles to getting the health coverage needed to access surgical care.

Mauricio passed away in December 2008, just short of his 39th birthday. While Mauricio had severe FD/MAS, FD/MAS is not typically a fatal disease. FD/MAS-related scoliosis can be lethal, but with proper care it can usually be managed so it does not result in death.

Mauricio was extraordinary because of who he was–his boundless courage, optimism, and resourcefulness–and the effect he had on those around him. His deep spirituality, thoughtfulness, and creativity brought him many wonderful experiences and friendships. One such friend was Sean Hepburn Ferrer, film producer and son of Audrey Hepburn, who ultimately wrote the children’s book about Mauricio’s life. Sean said simply that “After meeting him, in a short time, the physical gave way to the spiritual- and there he was- in all his beauty.”

Mauricio’s life offers important perspectives: a perspective on how challenging FD/MAS can be, and how wondrous a life touched by FD/MAS can be when someone insists upon living life fully in spite of it. There’s more to learn more about Mauricio, and the incredible story of his life and journey. Keep an eye out for Marisa Damele’s upcoming memoir to learn more.