The May 20th, 2018 Million Dollar Bike Ride marked Team Fibrous Dysplasia’s fourth consecutive year participating in University of Pennsylvania Orphan Disease Center’s charity ride for rare disease research. Team FD raised a record breaking $272,712.14 for FD/MAS research–more than the amounts raised in 2016 and 2017 combined. 100% of that sum will go directly to funding research grants for FD/MAS. This marks another exciting step in the FD/MAS community’s path towards a treatment or cure.

The ride has become a popular event for rare disease groups because it’s such a powerful way for a disease community to advance the state of research for particular diseases. “For Team FD, this year was an especially salient reminder of our power,” Said FDF Executive Director Deanna Portero, “Team FD had access to a new fundraising webpage system that made it easy for patients, families, and friends to self-enroll as fundraisers, donors and riders.” As a result, eleven campaigners stepped up alongside Team Captain Cindi Brandt Levin to advance FD/MAS research. The campaigners encouraged over 400 friends, coworkers, neighbors, and family members donate, and all those small acts of kindness and determination will lead to over $270,000 worth of research.

Among Team FD campaigners this year were several community keystones, including Cycle for Carly, Lauren Ruotolo, Rylan’s Rhythms, FD Warriors, Deanna Portero, Bike to Best FD, and Jacky’s Journey, all of whom campaigned for last year’s bike ride as well. They were joined this year by new and enthusiastic campaigners: The Healy family, A Cure for Jonathan, Hope for Harper, Wahoo Riders, and Adam’s Friends and Fans. “These patients, families, and advocates reached out and asked their communities to support our dream of better treatment options and ultimately a cure for FD/MAS patients, and our success is a testament to the generosity and commitment of all the friends and loved ones who rose to that occasion,” said Brandt Levin.

While not everyone was able to make it to Philadelphia for the actual bike ride, campaigners showed real creativity to encourage supporters to donate. The Healy family threw a “Shake Your Bones” dance party to help raise over $60,000. Top fundraisers Ziv and Orit Rosenblum of team “A Cure for Jonathan” used letter writing and phone calls to encourage donations from across the globe, including gifts from Israel, Germany, and Australia, to raise over $70,000. Another campaigner sent supporters original artwork from her 18 month old son to raise about $800 from her family and friends, and FD Warriors Inc. sold t-shirts that said “I ride for FD/MAS research” and gave the proceeds to Team FD.

“There are a million ways to fundraise to support the fight against FD/MAS,” said Executive Director Deanna Portero. “The only method that has been proven to be unsuccessful is to never try.” 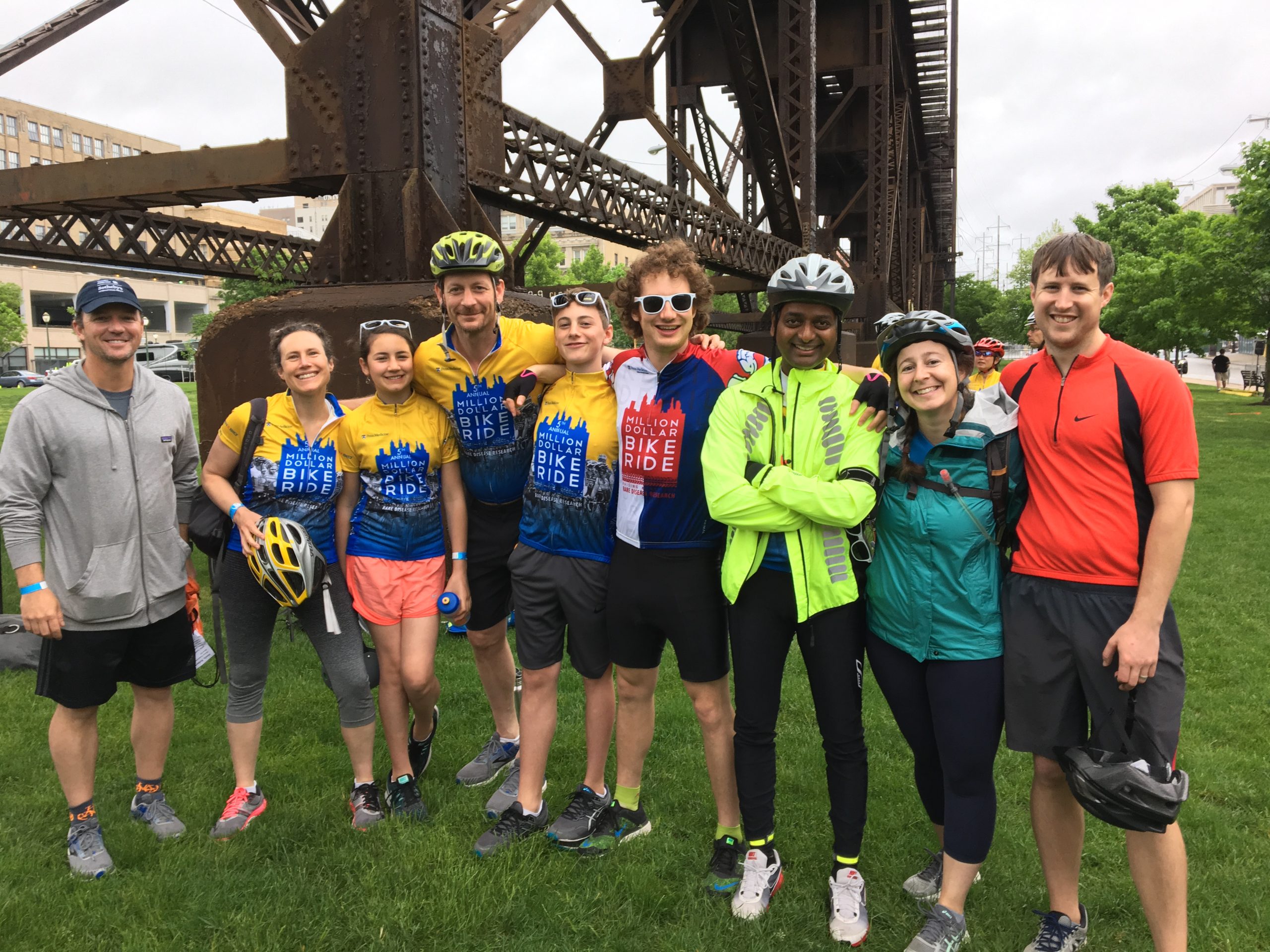 Riders who did make it to the event were treated with mostly clear skies and a lovely ride along the Philadelphia’s Schuykill river. Team Wahoo Riders, led by parents Kim Indressano and Brian Romer, rode together as a family after raising over $13,000 for research. This family of four made up the largest contingent of Team FD’s 9 riders, who rode anywhere from 13 to an impressive 72 miles in support of rare disease research.

“I cannot express how thrilling it was to watch Team FD come together this year,” Said Brandt Levin. Over the last 3 years, Team FD and the FD/MAS community has raised nearly $300,000 for FD/MAS research, and this year nearly doubles that number to $560,000 directly to FD/MAS research. Together, Team FD has funded grants to explore proteins that block FD lesion growth, and the development of more accurate mouse models of FD/MAS. “These advances have been vital to the FD/MAS community’s progress towards a treatment or cure and we are thrilled to be able to offer grant opportunities to as many promising research proposals as we possibly can.” said Brandt Levin.

The type of grants that Team FD awards through the Million Dollar Bike Ride are often called “seed grants” or “pilot grants.” They are called that because these grants give researchers financial support for new ideas with great potential for high-impact, when those ideas are in the earliest stages. The researchers use the seed grant funding to generate enough preliminary data and results that they can win larger grants from institutions like the National Institutes of Health, major research foundations, or funding from a private company to pursue the new idea for an effective treatment. Biomedical research and innovation are very expensive, and some new ideas will inevitably fail, so providing ample and consistent funding for seed grants is part of FDF’s strategy to #CureFDMAS. “This fundraiser is extremely important for “seeding“ a pipeline of treatments and other innovations in research. Without these initial investments in high-risk, high-reward scientific projects, the chance of finding a “gamechanger” for FD/MAS drops dramatically,” explains Portero.

Moving forward, the FDF’s Scientific Advisory Committee will put together a request for proposals to encourage scientists to apply with their most promising research ideas to advance FD/MAS science. Grants will be awarded by UPenn with the guidance of FDF’s Scientific Advisors and announced in December of this year. FDF will continue to monitor these grants and update the community every step of the way.